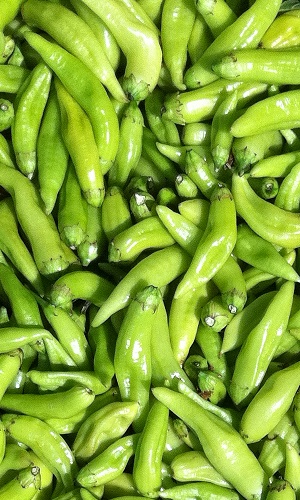 No matter where in the world pepper eaters find themselves they are probably not far from a place willing to showcase its own unique variety of chile pepper. Some varieties have legendary status with chileheads, like the chimayo chiles and Hatch chiles in New Mexico, datils in Florida and the Carolinas and the mole chiles of Oaxaca, just to mention a few. Visit one of these areas and you can easily find someone who will anoint their local variety of chile superior to any other. Unlike the bells and jalapenos at your local grocery store, local varieties are often the domain of backyard growers or very small companies. Regionally popular varieties are linked not only with tasty food, but to the people, events and history their geographic home. The region is no exception as folks there have been growing and eating the Italian Wax Pepper for over 160 years.

The Italian Wax Pepper is from the capsicum baccatum family and is grown almost exclusively in . Like other plants in the baccatum family, the Italian Wax Pepper makes a blossom whose white flowers bear a unique, yellow pattern. This pepper distinctively grows from a light, pea green to a whitish, pale green color before finally maturing to red. The Italian Wax Pepper  is 3 ½” to 4 ½” long when mature and about ½” to ¾” in diameter. The peppers have a thin skin and a crisp, moderately-thick flesh. The plants produce pendant pods that often grow a little crooked and kinked, unlike other varieties that produce straighter, smoother pods (i.e. jalapenos, petite banana wax). The Italian Wax Pepper is often harvested when it is shorter, dark green and mild. Mature pods will develop heat levels that rival Serrano peppers and hot Hungarian peppers (12,000 to 22,000 Scoville units).

While we can easily proclaim the modern home of the Italian Wax Peppers, exactly how the pepper came to this area and how it got its name are historical curiosities. The story starts in , the ancient birthplace of all peppers. The region where the wild peppers first began to flourish lies between the and the mountains of southern , near the Tropic of Capricorn. It contains the southern part of , the northern part of and part of . Just to the north, the capsicum baccatum family is believed to have first taken hold in or . Like , it is a region where mountainous terrain descends into warm, fertile valleys. For thousands of years peppers grew wild in this area. It is generally believed that man arrived in about ten thousand years ago, shortly before a global cooling trend would force early South American cultures to begin cultivating many wild crops, including the ancient relatives of the Italian Wax Pepper. A long list of South American cultures is responsible for wild chile peppers surviving as deliberately guided varieties. At the end of this list is the Inca Empire, lasting from 1000 AD and 1532 AD. Peppers were not only food for the Incas, but also played a role in some religious ceremonies. The Incas used farming techniques like an accurate calendar, irrigation and fertilization to advance beyond basic cultivation. They experimented with different varieties of corn, potatoes, sweet potatoes, beans, squash, peanuts and peppers, in effect harnessing a plant’s own powers of natural selection, genetic variation and mutation. The pepper varieties the Inca grew are primarily classified as Capsicum baccatum or capsicum chinense. If you could go back in time and observe the peppers the Incas grew you would find one that closely resembles an Italian Wax Pepper. There are two varieties of pepper that are associated with the Italian Wax Pepper. Both varieties originated in and are still grown there today. The chile that became the Italian Wax Pepper was most likely a variety called “white wax”. There is also a South American chile called “aji ” that is very similar to the Italian Wax.
For many centuries the baccatum family would remain in , avoiding discovery by explorers looking for spices, traders from and Conquistadors looking for gold. When the Incas were conquered and subsequently fled their home in 1532, they may have spread the baccatum variety to other areas of , but not beyond. In fact, the baccatum family of pepper would continue to exist solely in for over 300 years before the California Gold Rush would finally help the Italian Wax Peppers variety gets its start.
Intertwined with events like becoming a State and completing the Transcontinental Railroad, the Gold Rush in the mid-1800s may be the single most important event in ’s history. The frenzy created by the Gold Rush brought people from many nations to , including a substantial group from . Word of the Gold Rush reached the continent of in 1848 and soon after Chileans began clamoring to get aboard ships. The first Chilean residents to arrive were immigrants from who had been merchants in . They set up stores to supply miners with clothing, tools, liquor, etc. Soon after, native Chileans, many of them miners and diggers left for . We do know that many Chileans worked and settled in the foothills surrounding the . The settled in places like , , and . There are monuments to Chilean immigrants in Murphys, . The Chileans that came added to ’s cultural landscape in many ways, including some of the special food products they introduced. One of these products was the Chileno Pepper, a chile that would come to know as the Italian Wax Pepper. Both monikers, “Chileno Pepper” and “Italian Wax Pepper”, were given to the variety after it arrived in . Yet, exactly how the pepper brought by the Chileans got the name “Italian Wax Pepper” is a bit of mystery. The answer lies in the range. 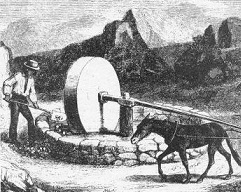 The Chileans were quick to adopt the mountains as home because of the familiar geographic landscape. Although not as tall as the , the range has similar mountains, foothills and valleys. Weather conditions are similar in the two locations, but not as extreme in . The seasons are also shifted because the two locations lie in different hemispheres. Not only was the area familiar to the Chileans, but it probably did not take long to find a little valley in the foothills were they could plant their pepper seeds. Once the peppers had grown and were harvested it was common for the Chileans to crush the chiles into powder. It would be the need for crushed chiles that would bring the Italians into the story.
During the first ninety years of 's history Italians were the largest immigrant group in the State. The largest numbers of Italians settled in from the 1850s  through the 1880s. Many of the Italian immigrants were from , in particular from , a region that contains . Although these immigrants came to through larger cities many settled in the isolated hills where gold could be mined. The foothill counties of (i.e. Amador, Calaveras, etc.) became home to a large percentage of Italians. Like , the foothills of have a mountainous terrain that demands certain skills for survival. For example, early in the history of the Gold Rush Italian stone masons from helped to cut out the mining roads and the first mines in . Stone cutting was not the only skill that the Italians found useful in their new home. Relevant to the search for the Italian Wax Pepper, these Italian immigrants also began farming on small plots of land. Everyone who settled in mining areas found themselves a good distance from fresh vegetables, fruit and meat, so there was plenty of support for the small farms. Practiced at growing on small plots in hillside locations, the Italians became prolific farmers with over 1,000 Italian “gardens” in operation at the peak of the Gold Rush.
When commercial producers began purchasing seed in the late 1930’s the pepper already had the name “Italian Wax Pepper”. Somewhere between 1850 and 1930 the baccatum pepper from starting growing in a new area and got itself a new name. A careful look at the history of towns discovered that the Chileans living in built several chili mills. A chill mill is essentially two huge, flat, circular stones placed one atop the other. Peppers are fed in between the stones where they are crushed into powder as the stones rotate. Some of the Italians from living in the range were stonecutters. Interacting over stones for the chile mill, probably between 1880 and 1900, the Italians and the Chileans came together long enough for the unique peppers to enter the Italian’s food consciousness. Although the exact exchange has never been identified, perhaps it was a gift of chiles or chile seeds that eventually ended up in the numerous gardens the Italians had. This hypothetical exchange would be the beginning of the pepper’s move toward being called an Italian Wax Pepper. Over the next four or five decades, as the Italian and Chilean communities continued to grow throughout Northern California, the chile would spread with them. One can only assume that the pepper made geographic leaps in popularity as horses and trains aided with trade from the hills to the valley to the coast. The source for the pepper must have shifted to the Italians, thus the name Italian Wax Pepper. This would be consistent with the involvement of Italians in ’s agricultural history and their reputation for making delicious cuisine. Today, over 130 years after its ancestors first arrived, the Italian Wax Pepper continues to grow in backyards and pepper fields throughout .
The chile pepper world is filled with controversy. Most of the arguments surround which pepper is hottest or where the best peppers are grown, but there are many interesting debates concerning chile pepper origin. The origin of the Italian Wax Pepper also has some debatable “gray area”. You may have heard the claim that the Italian Wax Pepper was brought to by Italians returning from and then made its way to the with Italians attracted by ’s Gold Rush. There was a well documented exodus of Italians in the mid-1800s, many of whom adopted as a home. Likewise, the arrival of Italians in during the late 1800’s is also well documented. There is not, however, much convincing evidence that an ancestor of the Italian Wax went with them. The capsicum baccatum variety has never had much popularity in and none of the peppers currently grown there resemble an Italian Wax Pepper. The capsicum annum variety was popular in long before Italians immigrated to . Finally, there is little evidence of an Italian Wax Pepper in North American cities where migrating Italians stopped and made a new home (i.e. , , ).
Regardless of its somewhat mysterious path to arrival, there is no doubting that has become a second home for this member of the capsicum baccatum species. After discovering its nature and its history, a proud local may wonder, “What is the future of the Italian Wax Pepper?” The immediate answer seems a little bleak. Commercial growers seem the most threatened. Rising wages, loss of water rights and increased regulations have nearly eliminated pepper growers from . As acreage is shifted into developed land, the disappearance of ’s prime agricultural land is another concern. Fortunately, the Italian Wax Pepper is a long way from disappearing. There are few things in this world that remind us of the places we love more than sights, smells and taste of truly local food. No matter what our ailments, doesn’t someone always recommend a little “home cookin’”. Because the variety has a place in ’s culinary history, someone, be they Italians, backyard growers, pepper fanatics or curious cooks, will help to continue the Italian Wax Pepper tradition in .